ProFound - An App for Photographers

ProFound - An App for Photographers

Back to top – Next Section

In most cases, a photographer will blitz their personal network through social media, private messages, or email to find a second photographer.

The most popular method of finding a second photographer is posting into local Facebook photography groups. This will often yield a wide range of results, and the only way to judge the quality of the photographers is to stalk each persons profile and hope for the best. It can get chaotic and difficult to keep track of each photographer and their skill level. 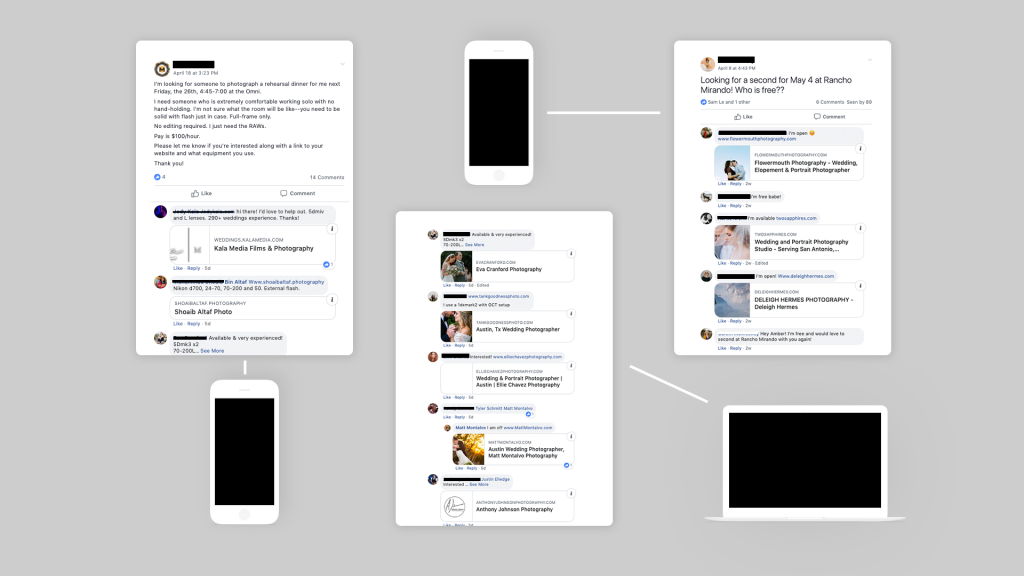 In one interview, the photographer said:

“I feel like I am constantly hunting [for second photographers]”

“My approach is very informal. I’ve always wondered if there was a better way.”

To gather a more quantitative perspective on the problem, I created a survey that I sent out to several local Facebook photography groups. In the form, I separated users by their main roles: 1) they are most often hiring other photographers or 2) they are looking to be hired. 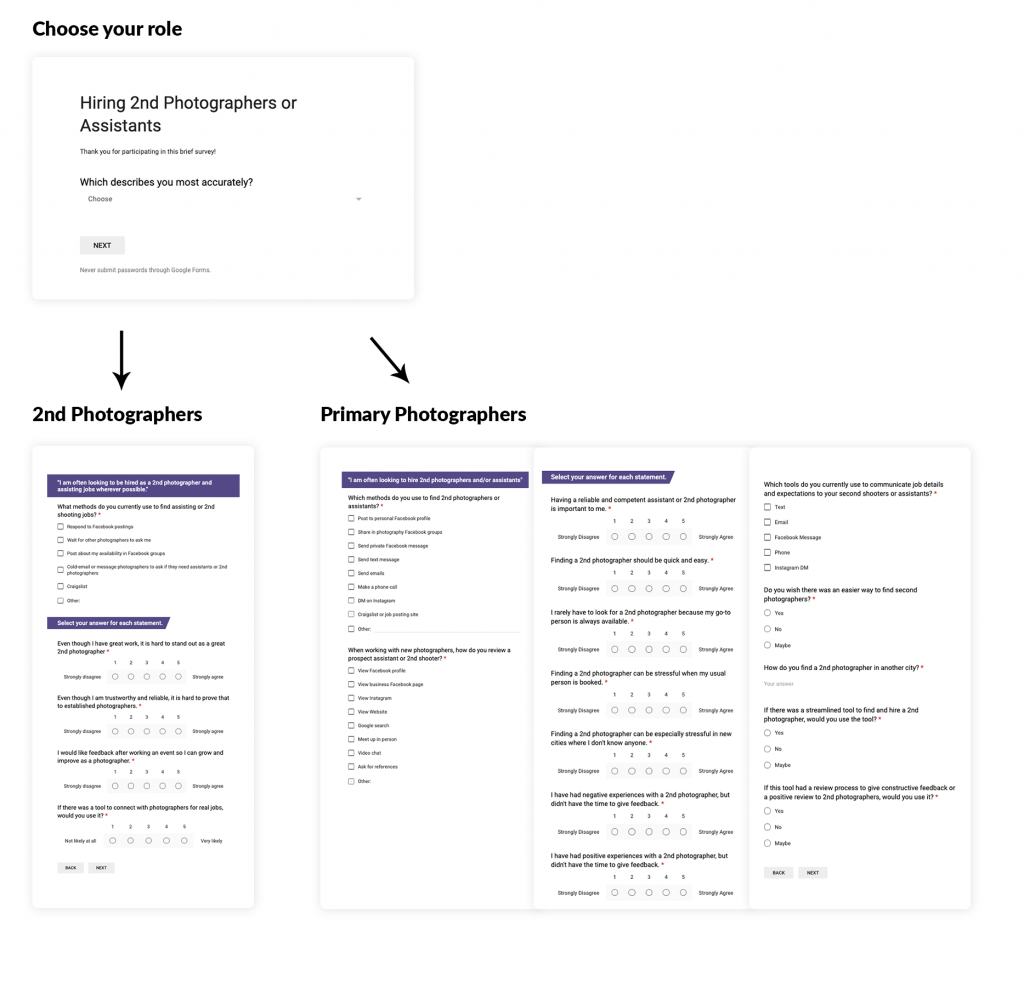 I received 25 responses over the course of one week. 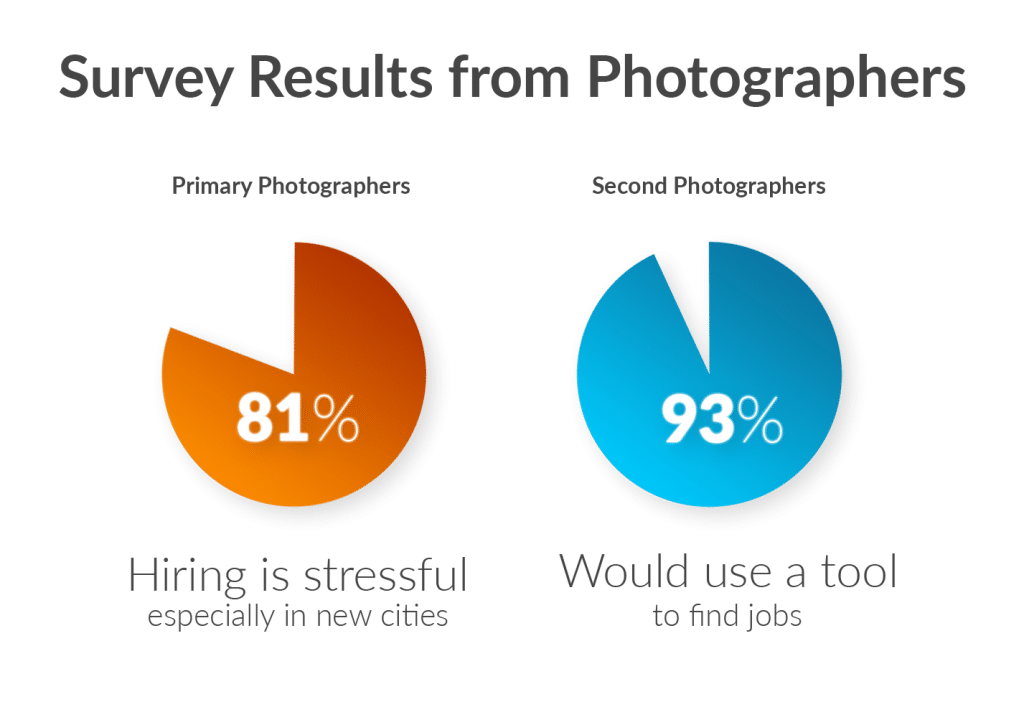 And for photographers looking to be hired (Second Photographers), I found the following:

After collecting all the data from the interviews and surveys, I found a repeating themes about the hiring and posting process:

In other words, both photographers looking to hire and be hired find the booking process stressful, especially when traveling for work.

Based off this information from the interviews and surveys, I concluded that creating an app to streamline the process of connecting photographers with other photographers for work was worth pursuing.

To guide my thinking and build empathy for my users, I researched two personas that describe my target users: 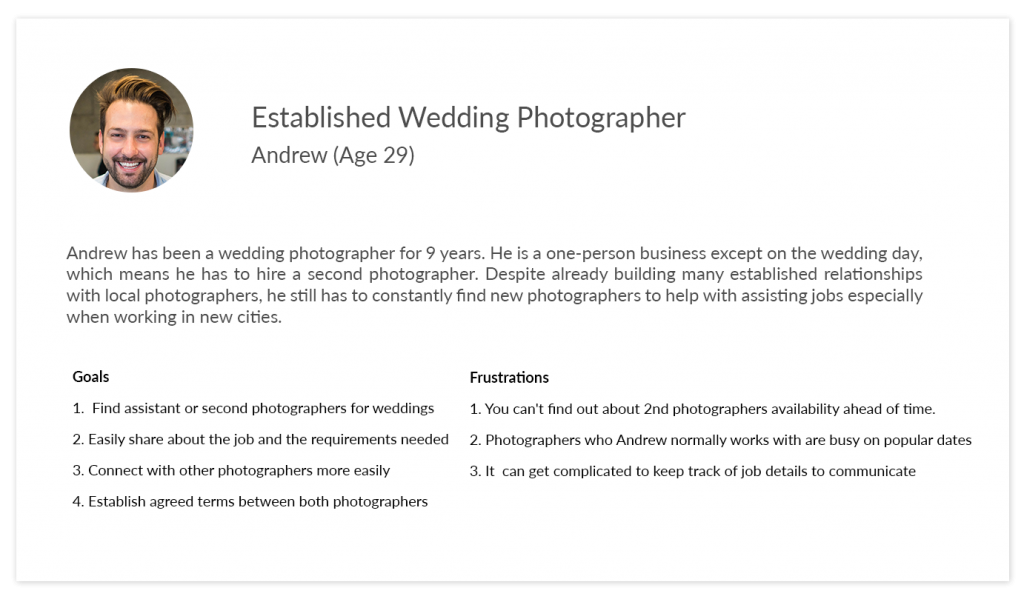 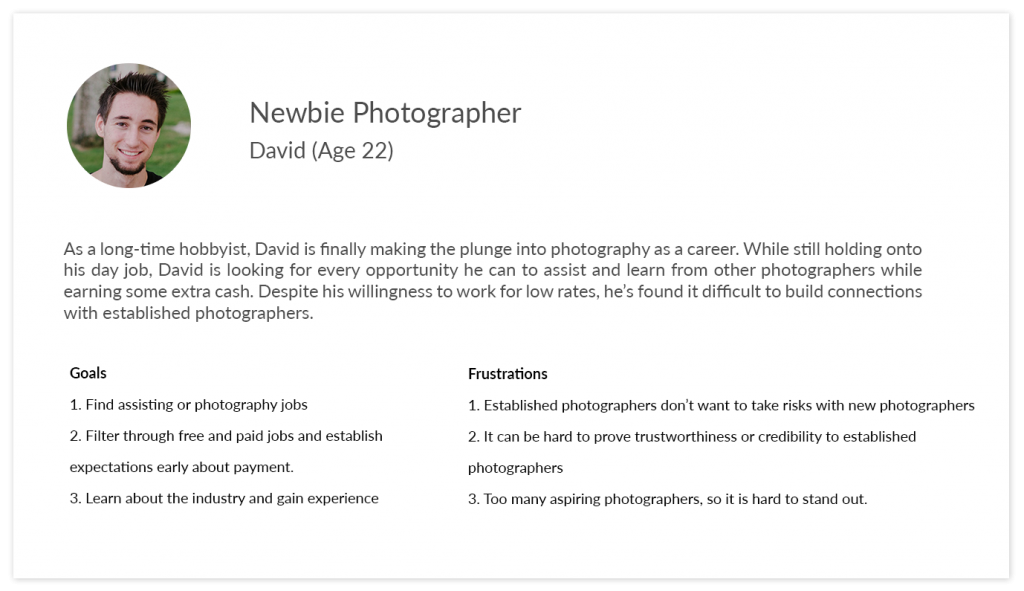 Using the Jobs to the Done framework, I created two job stories to narrow down the main goals:

When I have a wedding coming up

I want to hire a second photographer

So that I can have help on the wedding day

When I am not booked on a weekend

I want to find jobs as a second photographer

So that I can increase my income and gain experience

The existing user flow for Looking for a second photographer:

The existing user flow for Looking for jobs as a second photographer:

The revised user flow for Looking for a second photographer

The revised user flow for Looking for jobs as a second photographer:

Based off the revised user flows, I quickly sketched wireframes for the app. 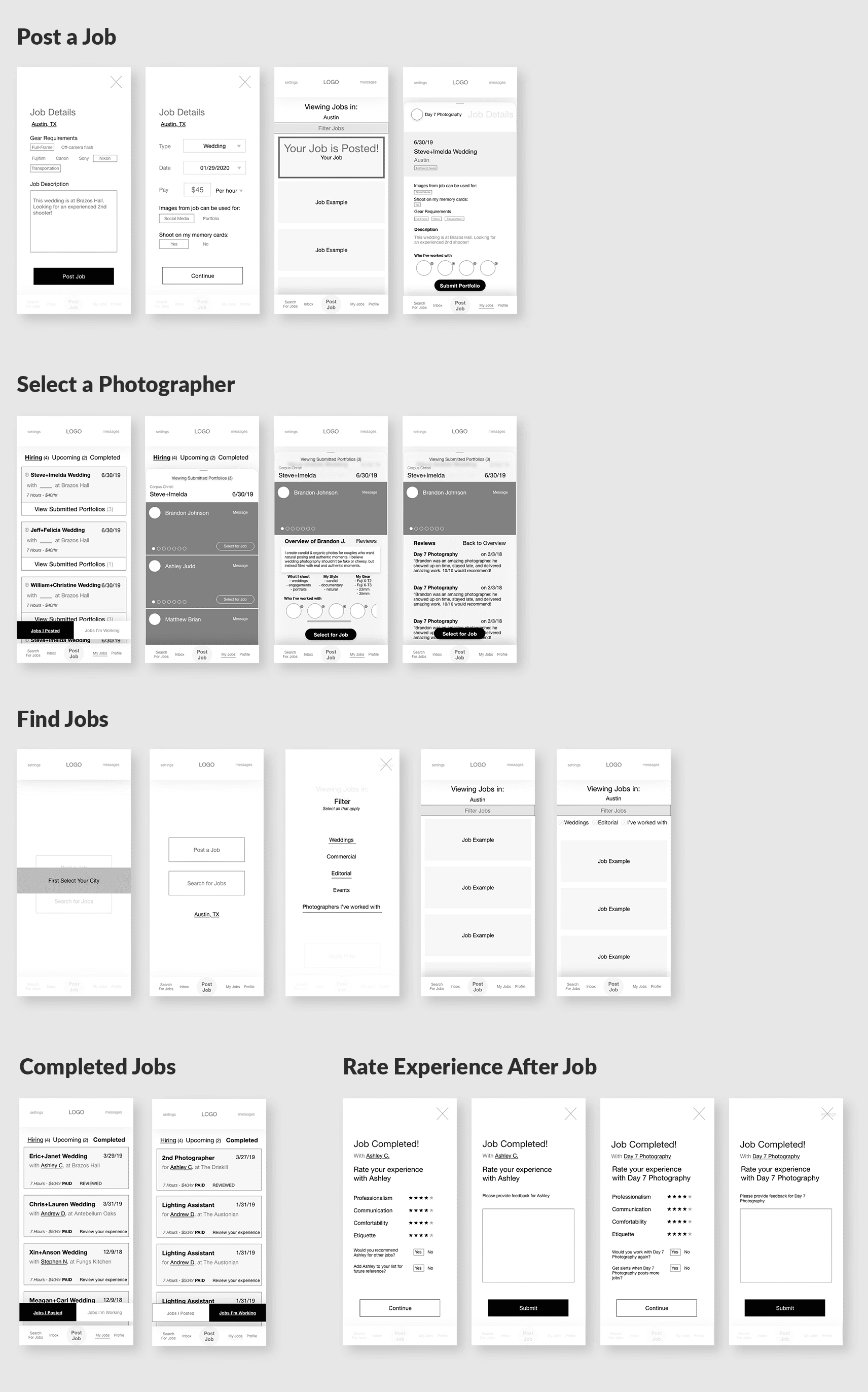 Over the course of 2 weeks, I tested 5 users on the usability of the app by giving 5 different tasks and recording their experience:

5 out of 5 users were able to complete the tasks all the tasks.

One user mentioned that the star rating feature (seen in the low-fi wireframes) made the experience feel too transactional and Yelp-like. This could prevent users from wanting to use the platform altogether, so I removed the star rating features shortly after early rounds of testing.  From the initial surveys, I learned that feedback after an event was a highly desired feature, so I kept the “review experience” links for completed jobs.

While users were successful in using the app to complete tasks, I heard several comments about users getting lost in the app. Since several screens looked alike, users would forget which section of the app they were in. As they described their thought process out loud, I heard users think through their decisions like this,

“Upcoming jobs, jobs hiring, and posting a job….hm, let me think about that.”

One user mentioned that they would search for jobs, but then get confused since the search screens looked like the jobs screen. In short, they couldn’t tell if they were viewing jobs they were working or jobs they were hiring for.

By listening to users think out loud, I discovered that I needed to differentiate the designs of my job listing screen, search screen, and hiring screen.

Back to top – Previous Section

Since my two users are Primary photographers and Second photographers, I realized I could remove sections of the app based on the role of the user as a way to prevent users from getting lost. This in return would reduce distractions while elevating the most important task for each role:

To clarify my thoughts on this flow, I created a flow chart with this revised user flow: 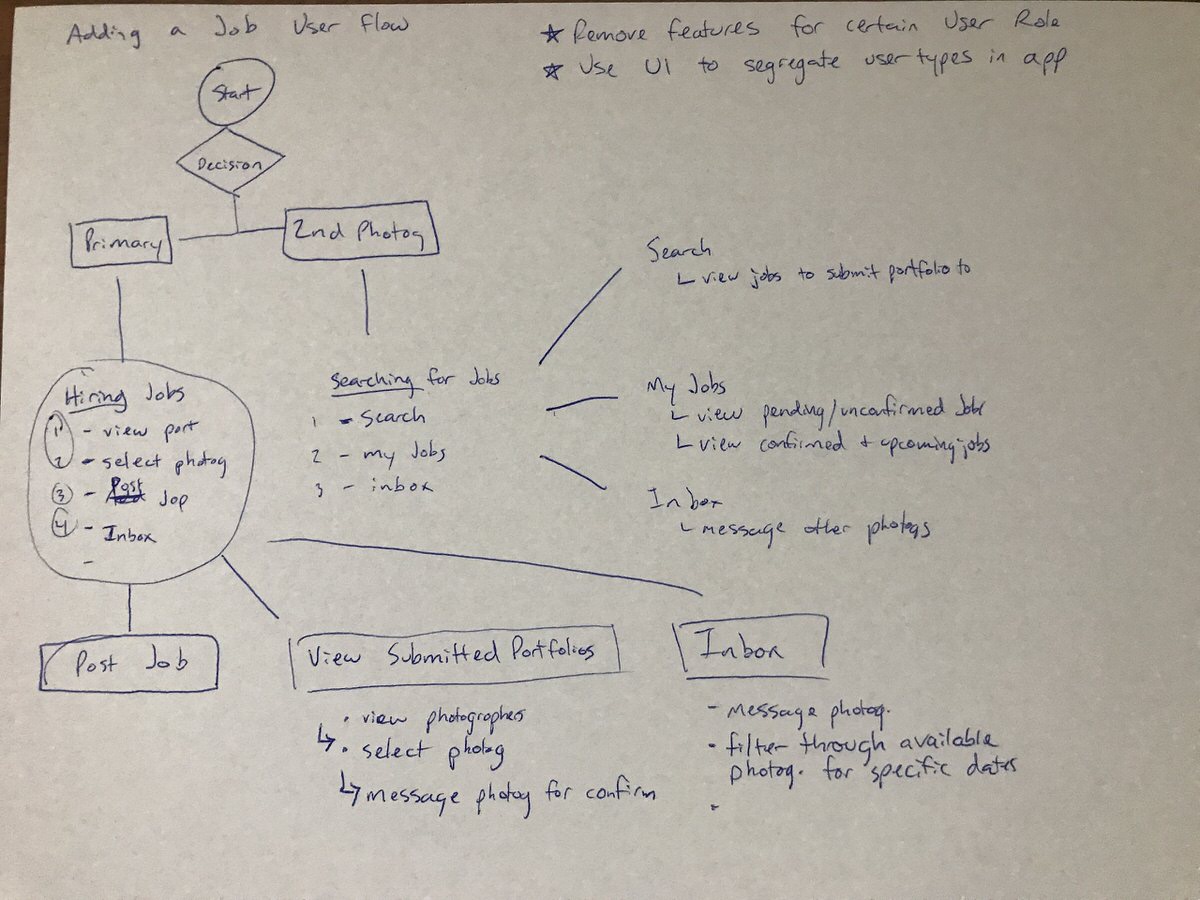 At the end of this brainstorming session, I concluded to:

Based on this pivot, I researched apps that are serving 2 different types of users in one single UI. Airbnb, Uber/Lyft, Ebay, and Indeed all follow this model, and I was able to find inspiration to bring into my UI.

I knew I needed to allow the user to change roles easily, and they also needed to clearly know which role they were at any point in the app. 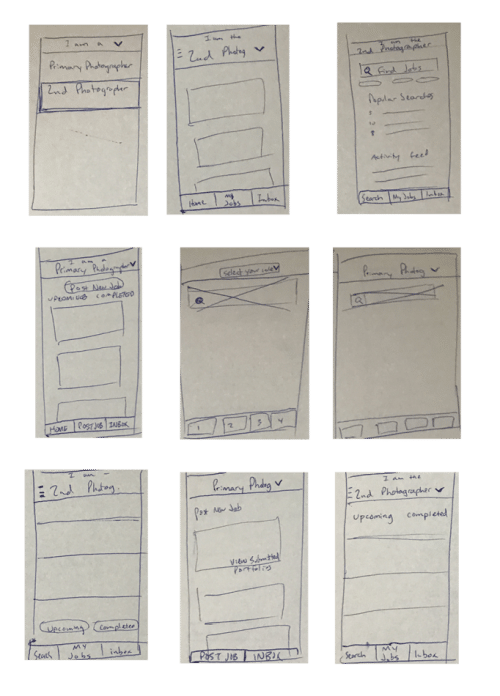 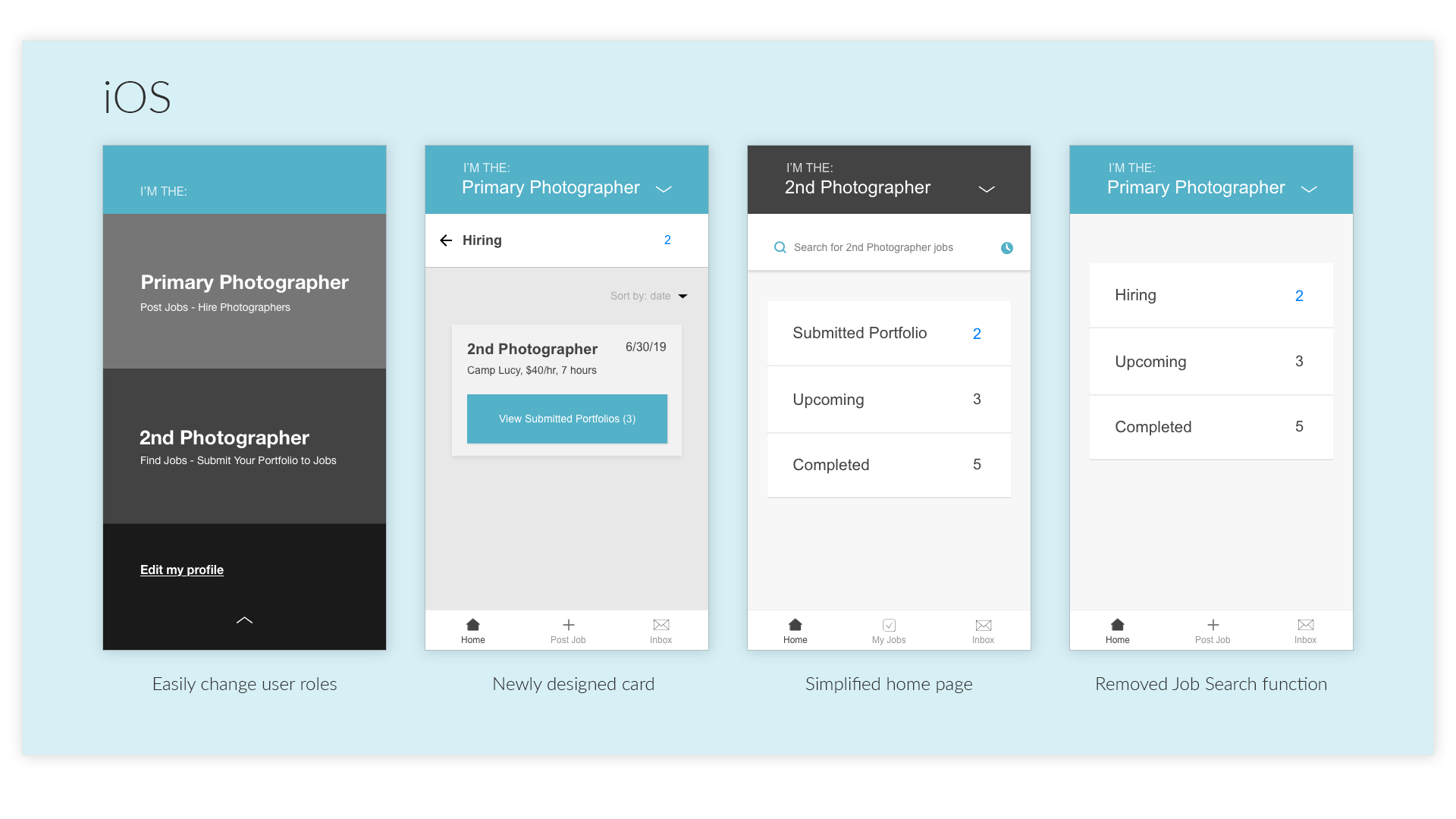 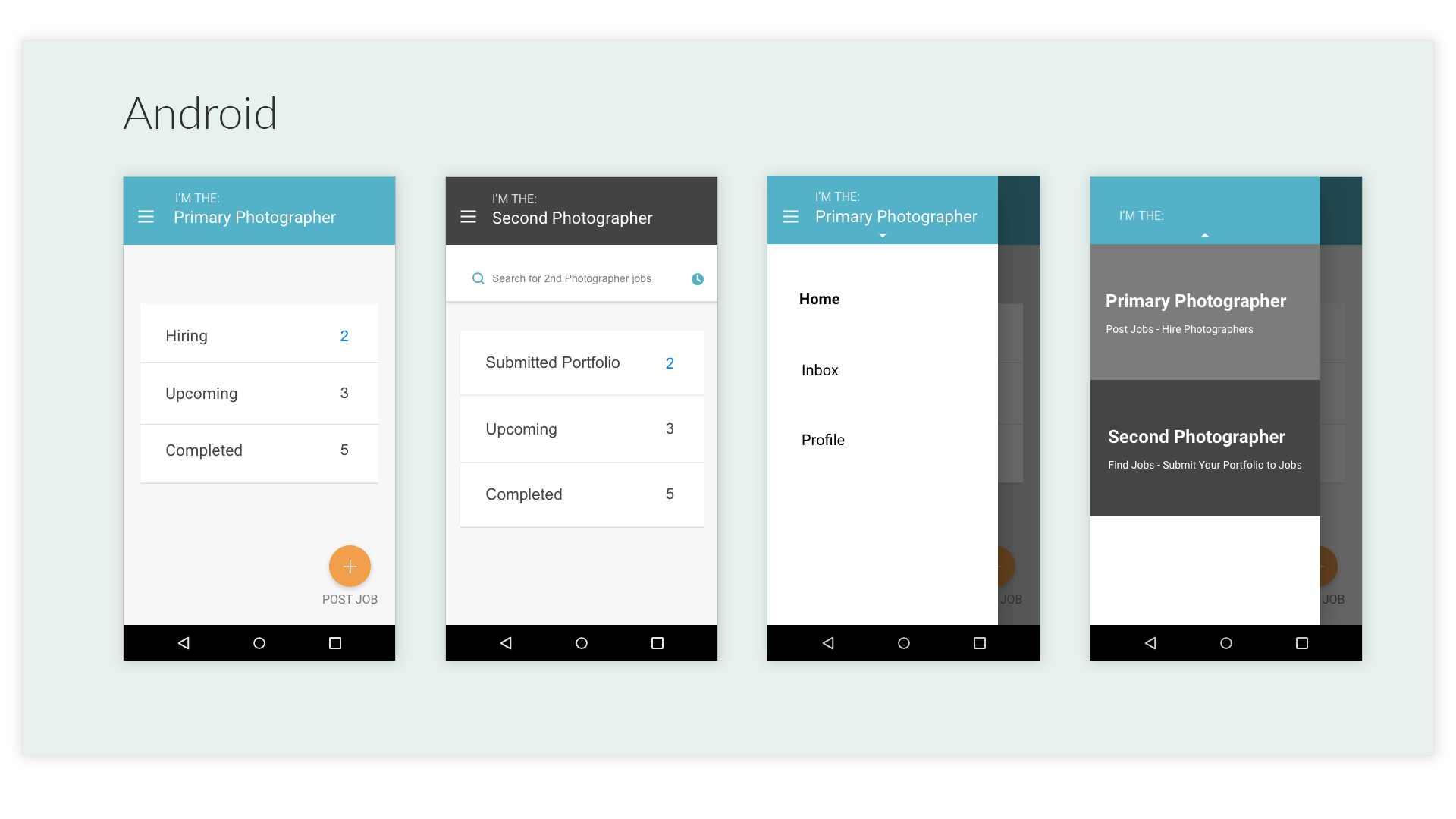 To test the effectiveness of this redesign, I returned to the same users for additional testing.

One user who thought out-loud while navigating the app said:

“This is exactly what I’ve been looking for to stay organized.”

When watching users use the app again, it was night and day.

Users completed tasks in half the amount of time and tapped buttons almost instantly when they saw them.

With the revised flow, there were less options to read through, and the prime role of the user was unmistakable for each screen. This led to less second guessing when navigating the app.

All 5 users claimed that the new design made the app much more simple and easy to navigate.

This reiteration was successful and users were pleased with the overall experience.

Through surveys, interviews, personas and job stories, I discovered the core issue with hiring second photographers: it was a messy process. Using my user research, I designed a simple, elegant, and robust solution to streamline the process of hiring second photographers and posting jobs. The process of user-testing and reiteration proved worthwhile as the product was greatly improved.